Key idea:  “Physicists have now discovered a completely new phase transition, at which the domains surprisingly exhibit quantum mechanical features, resulting in their properties becoming entangled (being black and white at the same time)”

Futurizonte Editor’s Note: I have no idea about what “entanglement of many atoms: means, but it sounds important

In physics, Schroedinger’s cat is an allegory for two of the most awe-inspiring effects of quantum mechanics: entanglement and superposition. Researchers from Dresden and Munich have now observed these behaviors on a much larger scale than that of the smallest of particles. Until now, materials that display properties like, e.g., magnetism have been known to have so-called domains – islands in which the materials properties are homogeneously either of one or a different kind (imagine them being either black or white, for example). Looking at lithium holmium fluoride (LiHoF4), the physicists have now discovered a completely new phase transition, at which the domains surprisingly exhibit quantum mechanical features, resulting in their properties becoming entangled (being black and white at the same time). “Our quantum cat now has a new fur because we’ve discovered a new quantum phase transition in LiHoF4 which has not previously been known to exist,” comments Matthias Vojta, Chair of Theoretical Solid State Physics at TUD.

“Even though there are more than 30 years of extensive research dedicated to phase transitions in quantum materials, we had previously assumed that the phenomenon of entanglement played a role only on a microscopic scale, where it involves only a few atoms at a time,” explains Christian Pfleiderer, Professor of Topology of Correlated Systems at the TUM.

Quantum entanglement is one of the most astonishing phenomena of physics, where the entangled quantum particles exist in a shared superposition state that allows for usually mutually exclusive properties (e.g., black and white) to occur simultaneously. As a rule, the laws of quantum mechanics only apply to microscopic particles. The research teams from Munich and Dresden have now succeeded in observing effects of quantum entanglement on a much larger scale, that of thousands of atoms. For this, they have chosen to work with the well-known compound LiHoF4. 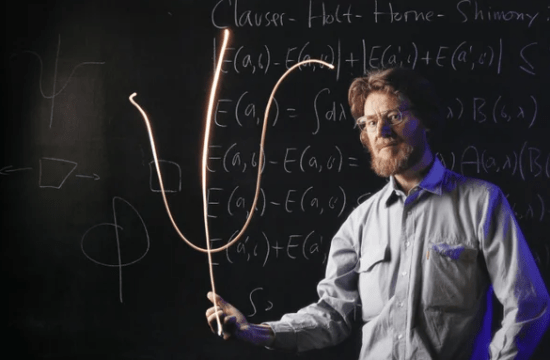 The Universe Is Not Locally…