Summary: Scanning through old data from the infrared satellite Iras, a British astronomer looking for the hypothetical Planet 9 says he has found a possible candidate

Futurizonte Editor’s Note: We are still discovering planets in our own solar system. What else is out there, close to us, waiting to be discovered (or hiding from us)?

Scanning through old data from the infrared satellite Iras, a British astronomer looking for the hypothetical Planet 9 says he has found a possible candidate. The nickname was given to a star who supposedly existed from Neptune beyond, as predicted by a pair of researchers in the US in 2016.

The whole story began when Michael Brown and Konstantin Batygin, astronomers at Caltech (California Institute of Technology), pointed out a strange alignment in the orbits of some trans-Neptunian objects, boulders residing in the depths of the Solar System. According to them, the alignment could only be explained by the gravitational influence of a ninth planet, larger than Earth, installed in a superlong and oval orbit.

Since then, researchers have been looking for such Planet 9 , unsuccessfully. And the strategy adopted by Michael Rowan-Robinson, from Imperial College London, was to hunt in the data of Iras, a NASA satellite that has scanned much of the sky over the years 1980.

Rowan-Robinson created a protocol to reanalyze the images for potential candidates who may have missed the original studies of the data.

After reprocessing the entire package, he came up with the only remaining potential candidate. It would be around the celestial coordinates 225 degrees of straight ascent, 15 degrees of declination (for those who are not familiar with the terminology, these are celestial analogues of and latitude longitude, respectively).

If such candidate is not some observation artifact, it could correspond to a planet located more than astronomical units from here (1 AU at the mean Earth-Sun distance, 60 millions of km).

A snap orbit would suggest a distance of 225 AU (more or less 15 UA) is a mass 3 to 5 times that of Earth, wrote Rowan-Robinson, in an article accepted for publication in the periodical Notices of the Royal Astronomical Society Monthly. He acknowledges that the candidate is probably not a real object, but indicates that it might be worth pointing telescopes in that direction to see if there really is something there. A search of a ring of radio 2.5 by 4 degrees centered around the position of 1983 at visible and near-infrared wavelengths can be valuable. 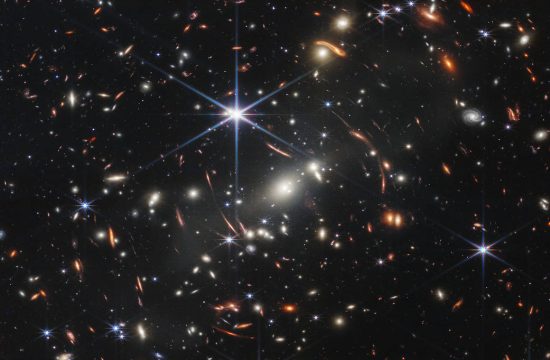